Apple’s strategy of a “walled garden” now seems to be inspected by U.S. antitrust authorities. The Wall Street Journal reports that the Federal Trade Commission and the Justice Department are overhauling Apple’s latest license change for the iPhone OS SDK 4.0. Although the process is at a preliminary stage, the interest of antitrust authorities show how powerful Apple has become in the field of mobile computing.

Some critics contend Apple is now engaging in the kind of tactics that got Microsoft Corp. in trouble with antitrust enforcers in the 1990s. “Apple is playing right out of Microsoft’s playbook—and it’s one they complained about a lot,” said David Balto, a former FTC official now at the Center for American Progress, a left-leaning think tank.

Apple could try to head off trouble with antitrust enforcers by changing the terms of its developer agreement, one person familiar with the situation said.

Narayan responded in the WSJ.com interview, that

Well, well, that love is not over. We wonder how far we’re away from the point when Adobe decides to stop developing for the Apple platform? Would Apple even care? Or would they just tell thousands of designers to switch to GIMP?

We hope you don’t mind, we embed the whole WSJ.com interview as Adobe Flash ;-)

Apple now has confirmed to be no fan of Adobe Flash. It is too buggy and not open standard and this and that. And foremost: it is no Apple technology ;-) Well, erm… Aswell as the iPhone the iPad is gonna show those nice and tiny Lego bricks instead of Adobe Flash based content. Bringing the web to your mobile device? Or rather bringing back the Lego bricks from our earliest childhood.

Now Adobe strikes back and reimplemented the iPad with all its amazing, wonderful and outstanding features – using real Lego ;-) 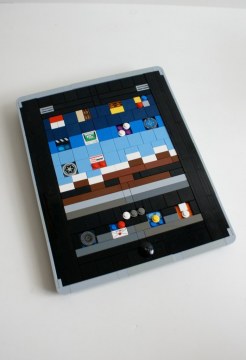 This product placement seems to have happened last minute, as you can tell from the reaction of Colbert’s wife. When asking her with a tongue-in-cheek:

Hunnie, Hunnie, does this make me look cool?

She just disapproves by shaking her head.

Anyway this is psychologically a brilliant step by Apple – as it generates demand for the iPad among the most important multiplier target group – the celebrities.

Steve Ballmer of Microsoft introduced one of the Tablet PCs – a prototype of the HP Slate – last week on the CES 2010. In his presentation the HP Slate is of course running Windows 7, what else, but there are rumors it might also be shipped with Google’s Android. We suppose Amazon’s Steve Bezos will not really like it, because Steve Ballmer showed the HP Slate running the PC Kindle application.

Dell seems also be ready to enter the Touch PCs’ market with the Dell Slate. Gizmodo.de got photos of a prototype of Dell’s Slate. Dell’s Slate has a 5-inch screen, most likely an OLED, a SIM slot and a 5 megapixel camera.

If Apple was a typical tech company they would also have showed something to the public on the CES, but Apple isn’t. Anyway there are enuff rumors floating around about Apple’s Touch-Mac – rumored to be named Apple iSlate. According to Reuters Apple might be launching the iSlate in Q2/2010. It is expected to have a 10 or 11-inch display and a aluminium case. TheStreet.com reports that Apple’s Slate will be shipped with a P A Semi CPU, instead of Intel based Atom CPUs. This could be also the reason, why Atom CPU has been removed from Mac OS X Snow Leopard’s latest update 10.6.2. It is widely expected that Apple will announce the iSlate on Januar 27th, 2010.

Kara Swisher of AllThingsD interviewed Mr. Podfather Prefather Jon Rubinstein of Palm at the CES. Although he seems to have been highly involved in the development of Apple’s iPhone back in the days when he was Apple’s senior vice president of hardware engineering, he said he never used an iPhone. Well… All in all he wasn’t telling too much, but when Kara asked him, if Palm will do a Tablet aswell, Rubinstein answered: “(..) we designed webOS to scale and it could be used in different form factors.”

The last weeks are full of rumors if AT&T will prolong their exclusive contracts with Apple. Rumors say the original contracts are gonna expire in the middle of 2010.

Thus allowing Apple to negotiate with different carriers like Verizon or T-Mobile. T-Mobile is currently the exclusive partner for Apple in Germany, Austria, the Netherlands, and the Czech Republic.

AT&T is said is willing to prolong their contracts until the end of 2011, but Verizon and T-Mobile seem to be secretely testing Apple’s forthcoming device named internally iPhone 3,1.

» TheStreet.com: Apple iPhone May Go to T-Mobile Next…
» iPhoneFAQ.org: Analyst: AT&T Exclusive iPhone Deal Up in June…
» JKontheRun.com: A 4G iPhone on Verizon Currently Under Test?…

In contrast to Apple’ AppStore, Palm today announced, they will also allow distribution of Palm Pre applications outside of Palm’s App Catalog.

The WebOS developer program will officially start in december 2009 for an annual fee of 100US$. The annual fee does not apply for open source applications, as they will be taken into the App Catalog and distributed for free.

For commercial apps aswell as Apple with their AppStore, Palm with their App Catalog will charge 30%, while 70% will go back to the developer.

“A public developer beta of the browser-based runtime is expected to be available for Windows® Mobile, Palm® webOS and desktop operating systems including Windows, Macintosh and Linux later this year.”

Developers may sign up for notification about the Adobe Flash beta for the Palm Pre.

Interestingly neither this statement nor the statement on Adobe Labs include a single word about Apple’s iPhone or the iPhone OS X. Could this mean Flash will not come anytime soon to the iPhone?

We’re almost sure, you read it already all over the net: Steve Jobs is back in his office. Rumors say he was transplanted a liver about two months ago and he is in good health condition.

Does all these news affect anything? Currently it seems no.

Apple’s presentations can also be run by Tim Cook, Phil Schiller, Bertrand Serlet, and Scott Forstall as we’ve seen on the last WWDC. But what about the future? What about the products?

This year’s WWDC did not have new big products. It was all about the operating system update to 10.6. (called Snow Leopard) and iPhone 3GS that mainly has been speed improved and now got features that many people said to be overdue.

What will be the next WWDC presentation about? Yet another Mac Book Super Pro? Or another iPhone 3Gs2?

Who will be the wholistic spin doctor who feeds the company with ideas and innovations? This is the main question. And we’re gonna find out within the next few years.

We suppose competition will become harder at least in the field of cell phones. As Palm hired Apple’s iPod architect Jon Rubinstein three years ago it seems Apple has lost someone knowing how to design user interfaces for digital media.

What leads us to the bold question: why not buying Palm to stop those “separatistic” tendencies and make Jon Rubinstein Steve Job’s successor?

Businessweek.com reports that there are rumors about an iPhone Lite and an Apple Media Pad. Both could be distributed exclusively by Verizon Wireless. One or both of the devices  could be introduced in this summer. Businessweek writes they were talking to someone who got his hands on a prototype of the iPhone Lite already. Moreover Verizon Wireless CEO Lowell McAdam confirmed that he has been talking to Steve Jobs during the last six months.Verizon Wireless is a U.S. american joint venture of Verizon Communications and the british Vodafone.

Businessweek writes as there is no deal done yet, from Apple’s point of view the Verizon talks may be helpful on certain levels. Verizon is also a potential Palm Pre distributer aswell as Sprint Nextel. Talks between Apple and Verizon could delay the introduction of Palm’s Pre. In contrast to Sprint who got 35 million customers a Palm Pre on Verizon could be a much harder competitor as they got 86 million customers. Moreover Apple can also use these talks to put pressure on AT&T to incur more expenses of the iPhone manufacturing.

Remember this is rumors. We feel it is quite unlikely that Apple will no prolong their partnership with AT&T.