With the release of Mac OS 10.7 Lion VMWare seem to have decided that all of Apple’s latest operating systems can be virtualized. VMWare Fusion 4.1. (released Nov 17th, 2011) thus allows the installation of all Mac OS X 10.5 Leopard, and 10.6. Snow Leopard versions; vulgo: the server and client editions.

The tiny downside is, VMWare seem to have gotten an urgent call from a fruity garage company in Infinite Loop soon after their release of VMWare Fusion 4.1. That’s why they issued VMWare Fusion 4.1.1 (released Nov 23rd, 2011) almost immediately, thus effectively reverting the capability of virtualizing the Mac OS X client versions.

That means: if you are running VMWare Fusion 4.1, you should consider not to upgrade to 4.1.1. If you have a Mac OS X client version virtualized it would not boot anymore after the update to Fusion 4.1.1. For all the others, VMWare does not distribute version 4.1 anymore, only 4.1.1. So you would have to search the net for download possibilities of VMWare Fusion 4.1. Update: the download link distributes version 3.1.1 (sic!) at the moment. You’re on your own finding the 4.1 download on the net (filename: “VMware-Fusion-4.1.0-529802-light.dmg”). Good luck. 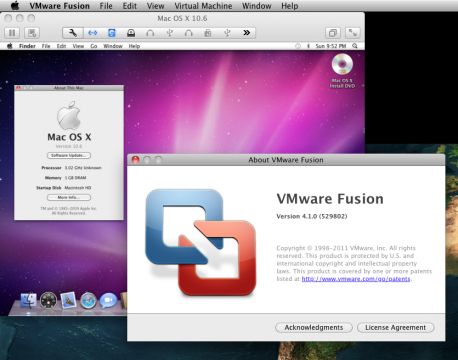 END_OF_DOCUMENT_TOKEN_TO_BE_REPLACED

Windows can eventually be used from the iPad. Users of Parallels Desktop 6 can seamlessly logon their Windows virtual appliance from the iPad. The required iPad app “Parallels Mobile” can be downloaded for free from the iTunes App Store (get it here). In the meantime check their vid:

We suppose Apple will not like that, but Oracle’s latest version of VirtualBox 3.2 Beta 1 now supports virtualization of Apple’s Mac OS X.

Although Apple’s license agreement clearly prohibits installing Mac OS X on other hardware than Apple’s, the screenshot shows that even the Windows version of Mac OS X is prepped to run Mac OS X as guest operating system.

On the other hand Apple’s license agreement is not valid in all countries. It cannot be applied in Germany and some other countries for example.

VirtualBox does not circumvent Apple’s binary protection. A VirtualBox developer confirmed, that Apple hardware is required in order to run Mac OS as guest in VirtualBox. So without tempering either with VirtualBox’ EFI or with Mac OS X it is not possible to run OS X in VirtualBox on a PC.

On the other hand a closer look at the EFI booter integrated in VirtualBox could reveal either how to modify PC Bios‘ to boot Mac OS X DVDs natively or how to expand our beloved Chameleon. 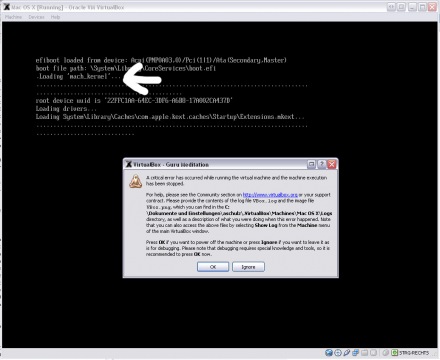 Obviously notorious George Hotz has managed to get all 7 SPUs of the Playstation 3’s CPU under his control. This means although he cannot access the CPU’s root key, he now can decrypt everything that’s going thru these SPUs like datastreams of (encrypted) commercial games.

The PPU is higher on the control chain then the SPUs. Even if checks were to be added to, for example, verify the hypervisor before decrypting the kernel, with clever memory mappings you can hide your modified hypervisor.

In the meantime another hacker going under the nick XorLoser has released a more detailed manual of how to use GeoHot’s exploitation files and how to do the glitching.

Besides that XorLoser maintains a plugin for reverser’s beloved Interactive Disassembler (IDA) that contains special PPC instructions for Xbox360 and PS3.

Congratulations to GeoHot. Kudos fly out to XorLoser.

Notorious iPhone hacker GeoHot has succesfully circumvented the Playstation’s security system. According to his latest blog entry, he has dumped LV0 and LV1 code, thus allowing him to (theoretically) run code on the processor, bypassing the hypervisor.

The Playstation’s hypervisor is intended to run third party software (like Yellow Dog Linux) on a virtualized level, thus maintaining system integrity and protection of the host system. Within this virtualized environment arbitrary access to certain hardware devices has been disabled, thus allowing only basic access to the graphic processing unit (GPU) for example.

GeoHot seems to have broken the chain of trust. This means he can bypass the hypervisor to directly access hardware like the GPU with his custom code. Anyway he has not released any further information or proof of his work. But hey, it is not anyone, it is GeoHot, so it seems solid.

We compiled some links for people being interested in the hypervisor protection topic.

» GeoHot: Hello hypervisor, I’m GeoHot…
» WeboPedia.com: Virtualization – All About Hypervisors…
» PS3News: Overview on Security architecture of the PS3…
» PS2Dev Wiki: Details about hypervisor functions of the PS3 and Toshiba’s CellEB…
» PS3News: A PS3 Game’s Flow of Execution; PS3’s base AIX…

The virtualizing software Parallels Desktop has been updated to version 5. Besides performance optimization and 3d performance boost, the integration of a Microsoft Windows operating system into the Mac environment has been significantly improved.

Parallels Desktop 5 is available in German, English, French and Spanish. With more languages like Chinese, Japanese and Russian to come soon.

It will come bundled with

The full version costs about €80, an update is available for €50. And customers who bought Parallels Desktop after October 1st, 2009 are entitled for a free upgrade.

Today Parallels released the server version of their virtualization software. The MacOS X version supports MacOS X server as guest operating system. The Linux and Windows versions will be released within the next six weeks, but they will not virtualize MacOS X – as Apple demanded. The price is currently set to 860€.