We suppose Apple will not like that, but Oracle’s latest version of VirtualBox 3.2 Beta 1 now supports virtualization of Apple’s Mac OS X.

Although Apple’s license agreement clearly prohibits installing Mac OS X on other hardware than Apple’s, the screenshot shows that even the Windows version of Mac OS X is prepped to run Mac OS X as guest operating system.

On the other hand Apple’s license agreement is not valid in all countries. It cannot be applied in Germany and some other countries for example.

VirtualBox does not circumvent Apple’s binary protection. A VirtualBox developer confirmed, that Apple hardware is required in order to run Mac OS as guest in VirtualBox. So without tempering either with VirtualBox’ EFI or with Mac OS X it is not possible to run OS X in VirtualBox on a PC.

On the other hand a closer look at the EFI booter integrated in VirtualBox could reveal either how to modify PC Bios‘ to boot Mac OS X DVDs natively or how to expand our beloved Chameleon. 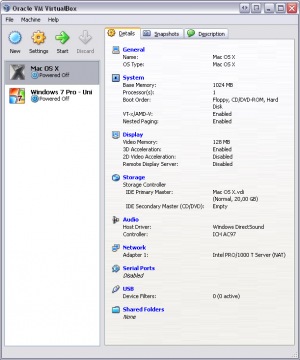