His driver is based on Realtec’s Linux driver which has been released under the GPL.

END_OF_DOCUMENT_TOKEN_TO_BE_REPLACED

One of – if not even – the best firewall software for the MacOS plattform is available for half the price… Until February 3rd, 2013.

Besides the firewall features for in- and outgoing connections, it also includes a very sophisticated network monitor.

Yeah, it was overdue already. The guys over at MacUpdate just launched their  pre-chrismas holiday app bundle. For US$49 you will get:

Anyway: the bundle makes sense at least for the TotalFinder, DataRescue, TotalSpaces and Snapz Pro. Means you can’t do anything wrong by buying it. And who knows, probably PopChar, MoneyWell and Swift Publisher might turn out to be useful aswell. The first 12,000 buyers will get Live Interior 3D for free on top (saves you another US$129)…

Get the bundle here: https://www.mupromo.com

According to Rixstep.com Apple plans to set up an App Store starting with the introduction of Mac OS X 10.7.

Developers planning on marketing software for 10.7 will submit their products to the App Store as iPhone and now iPad developers have already done. 10.7 will have kernel support for (‘insistence on’) binaries signed with Apple’s root certificate.

No software will be able to run on Mac OS X 10.7 without being approved and signed by Apple, Inc.

According to MacStories.net allegedly Steve Jobs has answered a direct request send to him by Fernando Valente of Chiaro Software. Valente asked him:

There’s a rumor saying there will be a Mac App Store and no software without authorization from Apple will run on Mac OS X. Is that true)

According to the mail Steve Jobs (or someone managing his email account) simply answered:

Anyway: you cannot be sure what his answer specifically means. Probably we’re gonna need jailbreaks for Mac OS X in the near future anyhow…

Notorious hacker Marc Maiffre said in an interview with CNet.com that OS X is less secure than Windows. The reason why Windows is more attacked anyway is Windows’ market penetration.

As of yesterday the notorious Mac Clone manufacturer Psystar has released a commercial software called Rebel EFI. Rebel EFI prepares a normal PC to allow for the installation of Mac OS.

[..] users simply insert a retail copy of the Snow Leopard DVD, follow the installation procedures and then install the application. The application automatically detects connected devices and downloads the appropriate drivers.

In contrast to the EFI-X manufacturers, Psystar in the past has released several drivers for free to the OSX86 scene. The advantage of Rebel EFI in contrast to solutions like the Chameleon boot is that is already comes with an automized hardware detection and a bunch of downloadable hardware drivers. Chameleon on the other hand is available free of charge and a lot more powerful for users in the know. So decide for yourself which product fits your needs the best.

A single license for Rebel EFI costs about 50US$ and can be ordered here. 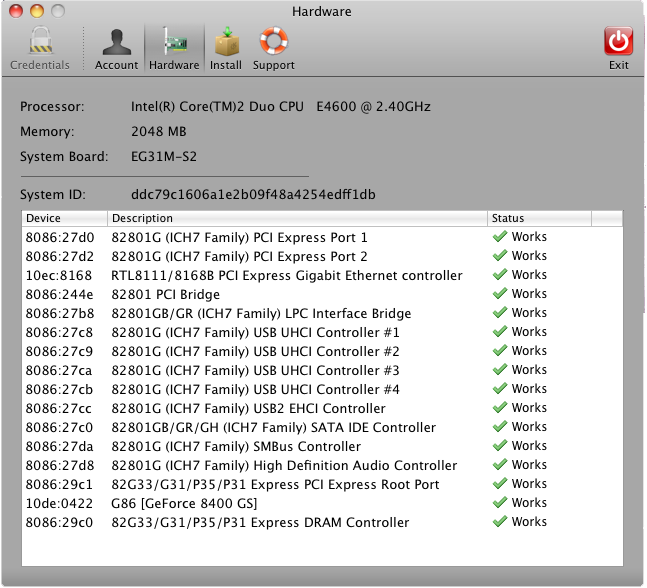 As of yesterday the Miami based company Psystar, which is still in legal trouble with Apple, announced to license their virtualization technology to third party manufacturers.

With the advent of Snow Leopard many users have issues installing it onto PC based hardware. Well this is not very curious, since a PC is no Mac. Anyway as Gigabyte motherboards proved to be very close to the original Apple Intel specifications many people decided to buy those boards.

With the release of Snow Leopard DSDT patching seems to have become a must. Installation attempts will most likely fail without it. The intention of this list is to provide comprehensive information on the most used Gigabyte motherboards.

The original idea for this list was by a guy called ximekon (find original list here on InsanelyMac forums).

you cant see this line, do you?

Your Help is Wanted

Please always crosscheck with the official Gigabyte specification page for your model (links to your model are included in the BIOS column) before adding a dsdt.aml or anything that could burn your BIOS.

About a year ago a company called ASEM released a device called EFI-X. This device has been claimed to be capable of booting several Microsoft Windows versions and Mac OS X Leopard.

From the beginning there were question regarding the legal status of the device. But ASEM claimed the device is legal, although it circumvents Apple’s binary protection using Apple’s copyrighted secret operating system keys (OSK1 and OSK2).

Anyway EFI-X devices had some issues. Many forums reported about problems with Bonjour and sharing in general. In the meantime articles from the official EFI-X support forums have been suddenly disappeared. Customers reporting issues or solutions and workaround to severe bugs have been banned from EFI-X support forums – our own help article to recover almost lost data was removed aswell and one of our members has been officially banned from their forums (the reason was this article in october 2008).

Now some frustrated customers who are on the other hand technologically very familiar have examined the EFI-X device in deep. One of the main points AsereBln found: in contrast to what EFI-X is stating: “Our approach is entirely different, (..) all our code and development is our own only” – they seem to be using program code that has been developed by the OSX86 community though. They seem to be using “Disabler.kext“. Moreover another user (RezRov) found out the EFI-X Windows update software seems to be violating the LGPL as it incorporates a modified USB device library (libusb-win32).

Use of possibly unlicensed 3rd party program code, possibly illegal use of Apple security keys, and customer support below grade for a 170€ (250US$) commercial product that seems to be the summary about a year after product launch.

We suppose end users should be aware of this possible hassle. Only an original Apple Mac is really hassle free and 100% compatible to a Mac. But if you are technologically interested and have the time and motivation search the OSX86 communities for setups. The OSX86 forums are full of knowledge and willing to help. But remember a PC won’t ever be 100% compatible to a real Mac.

The open source virus scanner ClamXav is not mentioned. Besides the major players Symantec and McAfee we can hope that Kaspersky also ports a version of their Anti Virus software soon. Or as Apple says:

“Apple encourages the widespread use of multiple antivirus utilities so that virus programmers have more than one application to circumvent, thus making the whole virus writing process more difficult.”