As it seems it will only jailbreak an already activated device and it will not perform a carrier unlock. The jailbreak tool is available for Windows and Mac OS X and it installs the Cydia repository.

iPad users be cautious, many Cydia Apps have not been checked for compliance with the iPad and might screw up your new gadget.

Get more information and the jailbreak tool here…

Kudos to Comex and Team Spirit.

The proxy unlock seller of the Rebel SIM has just released a tool to downgrade the Palm Pre’s baseband to re-allow proxy SIM unlocking with their Rebel SIM. Find the manual here.

As we don’t have exact information about how the Rebel SIM works we suspect it’s based on the same background as the iPhone proxy SIM’s.

As there are serious security and legality implications concerning using proxy SIM unlocked devices on networks, you’d better stop by here to read what the iPhone Dev Team found out about proxy SIMs.

It is well known, that there are commercial thieves who use freely available programs and ideas by the iPhone Dev Team, GeoHot, Chronic Dev Team and others.

We highly recommend not to buy any unlocking or jailbreaking solution. They are available for free.

We prepped a list of current scammers making a business modell out of other people’s efforts. The links don’t work as we don’t want you to go there.

iPhone unlocking seems to be a large market. Say any of these companies sold 5,000 unlocks (which is a quite conservative estimation). For an average price of 25US$. This makes 125,000US$ for setting up a stupid internet page with stolen and repackaged content.

A video appeared showing that SIM locked Palm Pre’s from the UK seems to have been unlocked using a proxy SIM solution called RebelSIM. There is no further detailed information about if this is a safe unlock like with the proxy SIMs for the first gen iPhones or i RebelSIM cards use IMSI fake IDs.

In general we suppose to be cautious with proxy SIM solutions. Why? Basically it’s the same with the proxy SIM cards for iPhones (read here).

A software unlock – meaning a binary code modification of the baseband – is almost always the better solution from a technical point of view, but it on the way to being able to patch the baseband many other issues can occur.

So for people who are desperate for a Palm Pre: get yourself the german factory unlocked version and learn to live with a QWERTZ keyboard. It much less hassle imho.

George Hotz – by now almost any iPhone user should know that guy – hacked the latest baseband firmware 05.11.07. The unlock will be named BlackSn0w, well …

That means all carrier or SIM locked iPhones around the globe running this latest firmware can be used with different SIM cards from different carriers. Thus making holidays no roaming fee horror show.

Information about the unlock procedures will be released on BlackRa1n.com on Nov 04, 2009. Until then, enjoy GeoHot’s video proof:

Kudos fly out to GeoHot. Standing work, dude. But why the hell is there always Snow, Rain, Snow, Rain. Why no sunshine, guys?

CNet.com reports Tuan Anh Do, a 29 years old business man from Hanoi, now offers hardware unlocking services for the iPhone 3G. He is owner of a couple of cell phone repair stores and he now managed to find a rather painless way to unlock the iPhone 3G and offer that as a service to customers. Unlocking costs about 80US$.

Tuan Anh Do is well known to the iPhone scene as TAmobile (Link here). He was also the first to extract the bootloader from the first generation iPhones.

Unfortunately unlocking requires desoldering, binary modifying and resoldering of the baseband chip and is therefore by far not fool proof. Painless unlocking here means “painless” for experiences solder technicians. For the rest of us we either plan a Vietnam holiday or wait for a store to offer that service around the corner. Anyway, find the whole story and some more really amazing pictures on Dong Ngo’s article on CNet.com.

Picture is courtesy of CNet.com 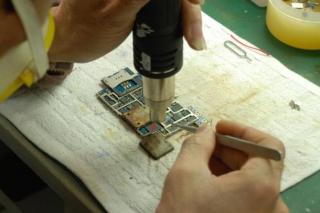 The iPhone Dev Team posted some news during the last days. First of all they show us they are able to run a modified 3G baseband, although it fails integrity checks (see picture). And obviously they coded a baseband tool that allows execution of custom commands on the baseband.

Their silent and evolving works seems to be succesfull. Both these steps are major steps into a custom unlock. Anyway we don’t have information how long it will take until the final unlock, but we expect it to be aired before Chrismas.

Picture and video is courtesy of iPhone Dev Team.

Although we didn’t get our hands on a new iPhone 3G yet, things are as expected: the iPhone 3G uses a new bootloader for its baseband modem as confirmed by Geohot.

Bootloader versions from the “old” iPhones

As far as we are aware the there are those 3 different bootloader versions known on old iPhones:

It is widely known, that exploits for these old bootloaders have been found, that allow to SIM unlock any of these old iPhones. No matter which software revision is running.

No Unlock for iPhone 3G, but for old iPhones

For the new iPhone 3G bootloader, there is no (public) exploit known yet. Although the iPhone Dev Team states they can unlock firmware 2.0 – the unlock is most likely meant to work on “old” iPhones only. The only exploit yet known (in both old and new iPhones) is an iBoot bug. The iPhone Dev Team provided a video showing Pwnage Tool neutering the baseband for firmware 2.0:

Video: Pwnage Tool Bootneuter on firmware 2.0 (on an old iPhone)

A new jailbreak for iPhone 3G and old iPhones

The Pwnage Tool 2.0 (and Geohot’s yiPhone) will most likely feature an iBoot bug to jailbreak old and new iPhones. iBoot is needed by iTunes to talk to when restoring firmware. About a year ago, Geohot found out that iBoot provides a full interactive shell. The only problem was, iBoot only allowed signed code to run. The iPhone Dev Team now managed to break the chain of trust from the earliest boot stage. Thus allowing to run unsigned code and in the end jailbreaking old and new iPhones (see video):

Talking to iBoot? from iphonedev on Vimeo.

Both videos are provided by iPhone Dev Team. Kudos to you guys.