If you are working with virtual machines for testing and development purposes often, it might be comfy not to have to login manually after each reboot. So for those circumstances you can use a somewhat hidden feature to automatically login.

We strongly recommend not to do this on your working machine where you store all your sensitive information. END_OF_DOCUMENT_TOKEN_TO_BE_REPLACED

Just in time for the Musikmesse in Frankfurt (March 21st – 24th, 2012), the german audio company RME just presented a new possibly record breaking digital audio card. According to Digital Audionetworx and Synthax Store (both german only) the “HDSPe MADI FX” will feature:

END_OF_DOCUMENT_TOKEN_TO_BE_REPLACED

Tom’s Hardware tested Steam for the Mac intensively. Their first impressions are disappointing for Apple fans: the Windows version of Steam is a lot faster.

As their benchmark test they used the Valve’s game “Portal” and took benchmarks from two computers:

Right, they’ve set up a hackintosh with all its ingrediences. Check their tables: you can clearly see the framerates are a lot higher on a Windows installation, but on a Hackintosh system the Mac OS version of Portal becomes playable after all. 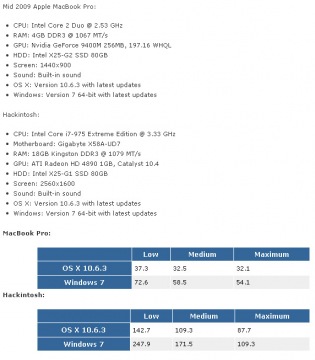 So what do we learn?

First: Valve’s step to get on to the Mac OS platform is a good one. But they still have lots of work to do. Second: playing on Windows means more fluent gaming as the framerates are a lot higher (around factor 2). Third: if you’re willing to play on Mac OS you may consider setting up a hackintosh. A hackintosh with the config above easily outpaces at a normal Mac Book and it costs only about half the money.

“and first for something complete different”: Muzaq… coding or administrating system can’t do without gooood muzaq. Check our latest tunes here :-)

Innotek originally collaborated with Connectix on Virtual PC – a virtualization software targeting the Mac OS platform. Connectix has been bought by Microsoft in 2003. Innotek then decided to develop VirtualBox.

VirtualBox is used by many companies for virtualization and thus developing. Palm for example uses VirtualBox for WebOS development in an emulated environment. Thus allowing either Linux, Mac OS or Windows host systems for development.

Any suggestions, hints or things need to be added? Don’t hesitate to tell us below…

By the way: some of the screensavers have also been ported to Mac OS and Linux.

TrueCrypt is the leading open-source software to encrypt drive volumes. It supports Windows, MacOS X, and Linux. Version 5.1 has been released just 3.5 months ago in march. Now the Truecrypt team has released version 6.0 with the following features: