Golem.de reports that the social music and media streaming service iMeem has been overtaken by Rupert Murdoch’s MySpace.com and eventually been closed. It seems like this buy was intended only to remove a possible competitor from the market.

iMeem was a Start up from San Francisco. It was founded by former Napster Employees. Users could upload music and music videos, that could then be listened to as a stream. In 2007 iMeem managed to make deals with major music labels in the U.S.

The forums and news sites are again full of coverage about a hack of the german Pay-TV channel Premiere (forthcoming name: Sky Germany). As we already stated in april, 2009 this is a hoax. There are no evidences or proofs whatsoever. Anyway you’d better read on, why we believe searching for a hack is useless.

END_OF_DOCUMENT_TOKEN_TO_BE_REPLACED

An improvisation theatre piece inspires the eloquently spoken Elisabeth to divulge a poignant story about Paul, a man from her past, to her granddaughter Simone. The story deeply moves Simone and she is certain – Elisabeth must see Paul again.

Simone’s attempt to bring the both of them together wrests an uncharacteristic lightness from the perishability of her own life and makes her a dreamer who is no longer able to take compromises for truths and who could not make a greater effort to embrace her own existence.

ALWAYS SUMMER is not only a quest for closeness – full of yearning, disappointments and moments of hope – but raises the question of what is possible when we really thrust ourselves into the beautiful chaos we call life.

Emotions are basic drives in our entire life and this is basically what this movie is about. It is about the fineness of social interaction between men and women. The actors show that life is a search for moments of mutual emotions, thus allowing to find themselves in a situation that helps us to become aware of reality. A never ending struggle for awareness through emotions.

Although this movie is not real you see how close to reality emotions are getting re-assembled and re-constructed. From our point of view: this movie is a must see for everyone who likes to get moved by movies. 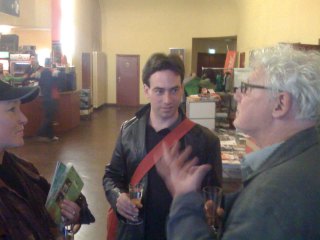 In german forums people are rumoring that the NDS Videoguard encryption for the german Pay-TV channel Premiere has been compromised. As this has not been confirmed we currently expect this to be a hoax like the Nagra3 hack that has been reported in august 2008.

For completeness we release a translation of the hacker’s statement (original in german to be found here on Gulli.com) of the allegedly hackers:

In the meantime the NDS hack has been confirmed by an admin and a smartcard distributor. They have been send pre-programmed white DPSCs (digital pirate smart cards).

At this moment the NDS hack has only been confirmed to be working for Premiere (german Pay TV station). The hack is based on the NDS temp crypthack from october 2008. This has been the starting point. In combination with the BlueCryptCam that also has a weakness in its NDS Videoguard implementation.

With a little modification it then became possible to access and dump the NDS card’s Eeprom and Rom areas. If this hack can also be applied to Sky Italia or Great Britain is currently unknown and will take some time.

Kudelski seems not to be involved in this hack although this is rumored.

There won’t be any emulators (emu). The “blue cards” containing an own operating system will be released and distributed within the next week . They will be programmable using a Phoenix, CAS3 or Infinity programmer.

Kind regards from the Ukraine

From a technical point of view this statement does not look serious. As the described approach is far to vague. The described NDS temp crypthack was an exploit during the transition phase from Nagra2 Aladin to Nagra3 or NDS Videoguard. Some satellite receivers got an unencrypted firmware update over the air that allowed to watch Premiere even without any smartcard (more information in german here on Dragon-Cam.org). As this was only possible during the transition phase, it is highly unlikely that this might be the basis for a successful compromise of NDS videoguard.

Moreover even if this card was real, we would not expect this card to see the light of day. There haven’t been many NDS hacks in the last years. Among other gentleman like business practices (read on TheRegister.co.uk, on Denver Business Journal and on Wired.com) NDS as a company of Rupert Murdoch’s imperium is rumored to have hired the best investigators to at least monitor hacking scene activities.

Update: March 30, 2009: reliable sources from the scene say this is a hoax. Further information are not available currently.

Update: March 31, 2009:We found a nice “Wired” Video. Tarnovski – one of the best known hackers on this planet – describes how to hack nowadays smart cards. It “only” takes some equipment and a “little” bit of experience ;-)

An emulator smart card called “Centaurus” is said to be available on the european grey markets within the next two weeks. This has not been confirmed, as said: this is rumors only.

More details about the Nagra encryption and Kudelski the company behind.