Firmware 2.1 will be released today. As of now, it cannot be pwned – no matter if you are running QuickPwn or PwnageTool. We recommend not to update until further notice.

The iPhone Dev Team reports iTunes tries to countermeasure the exploits the well known Pwnage Tool is using. After having compiled a custom firmware with Pwnage Tool or WinPwn, you need to install it using iTunes. Now, iTunes in version 8.0 refuses to install custom firmware, thus combatting Pwnage’s way into the iPhone or the iPod Touch. The iPhone Dev Team released the photo below indicating the error message from iTunes 8, when trying to install a custom firmware to a (not yet) pwned iPod Touch. As of now, it is unknown if iTunes can also detect an already installed custom firmware. Thus allowing original unmodded updates to install. This would also allow the use QuickPwn. iTunes seems not to be able to detect already pwned iPhones. Forum reports say, iTunes 8 still can install custom firmware to an already pwned iPhone. For those guys of you who are running a device fresh from the factory (means not pwned), use QuickPwn as a workaround for now.

Anyway the Dev Team reports, they are working on a way to trick iTunes, thus forcing iTunes to install custom firmwares even on not pwned devices. The iPhone Dev Team is currently prepping a whole lot of patches for iTunes 8, no matter if you are on Windows or on Mac. Patches will be released during the next week. 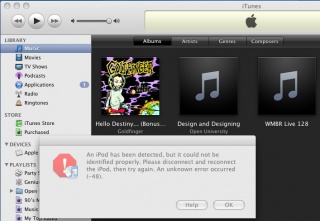