After breaking up for doing solo projects in 2003, they reunited in 2007 and said in an August 2007 interview that they reunited with the intention of touring and releasing a new record. The time has come. 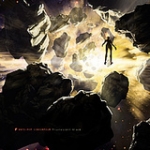